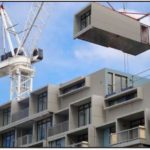 Modular Buildings – The future of construction?

An increasing population and the need for affordable housing has raised the use of modular buildings as being the way forward. Modular construction is not a new idea. It gained popularity shortly after the Second World War. It was a time when there was a need to replace the many houses lost because of the bombing. Today, the idea of modular homes has gained a new popularity due to a need for more affordable housing.

While modular structures may have, in the past, been labelled as generic or featureless, today this is no longer the case. Improved designs and technologies have changed that view. Today’s modules are now considered to be both well-made and modern looking.

1. Off-site construction
Building the modules for a new structure takes place in a factory. Costs are lower because of the mass production of modules. There are no delays due to things like bad weather or an available workforce, for example. It is only when the modules are built that assembly takes place on the construction site. By building in this way, it allows for faster completion time and reduced costs for the modular structure.

2. Cost Savings
As modules are prebuilt in factories, mass production means cost savings. For example, standard modules, like bathrooms, can be of a single design and specification. Other costs savings can come from there no longer being the need for the same number of skilled workers when compared with traditional building methods.

3. Quality Control
By building the modules in a factory, it allows for the application of exacting standards. They all have the same design and high standards. Because everything is prefabricated, the modules leaving the factory are always of high quality.

4. Eco-Friendly
Because building the modules takes place built off-site, it’s a lot easier to control materials. The result is that there is less waste and more recycling. Since materials are not going to the construction site, there’s also less waste due to things like weather damage, for example. Compared to traditional building methods, there is less pollution with modular construction.

And finally
The functionality, opportunities and low cost all mean that the success of modular buildings will continue to grow rather than decrease. With the availability of customisation and functional designs, modular construction is no longer just a way of building homes. The benefits and cost savings available make it something that businesses are also starting to look at.